Where I live I can get FTTC. I pay for up to 38Mbps (old way of describing) with Plusnet. I get 36 to 37 Mbps. I can get up to 80 Mbps and did have in the past where I got about 77 to 78 Mbps, again with Plusnet. I downgraded as they was a big difference between the prices at the time and I could make the saving.

Now my job is pretty much home based. I could upgrade to up to 80Mbps as I had before. FTTP is supposed to be coming and last summer they put fibre down the ducts in the street, but keeps saying isn't live - although I note a couple of houses in the street seem to of had FTTP installed.

The interesting alternative is that I have quite a few EE mast near my - it looks like they built out along the railway line. I currently have an iPhone 12 on unlimited data with EE. Speed tests vary, but majority of the time they are 100Mbps+ with a max of 150Mbps seen. Uploads of 40 to 60 Mbps. My current router can do FTTC and 4G+. I have tested the SIM in that with an external omnidirectional antenna and can get the same speeds.

So is it worth ditching the phone line and getting a 4G setup and another unlimited data SIM? for £35 a month from EE? I could do cheaper if I change my phone number use the original unlimited SIM in my 4G router, I could get 160GB a month on the phone for £18 a month.

I don't online game, although I do do video calls. I tend to turn the iPhone off of wireless and use the 4G at home.

I'd recommend grabbing a selection of PAYG sims and testing them out in your phone at different times of the day before going the 4G route. If you need a solid connection offering you max bandwidth 24/7 then It'd probably be better to stick with your FTTC connection though.

Buggerlugz said:
I'd recommend grabbing a selection of PAYG sims and testing them out in your phone at different times of the day before going the 4G route. If you need a solid connection offering you max bandwidth 24/7 then It'd probably be better to stick with your FTTC connection though.
Click to expand...

Thanks for feedback. Tried a few sims in past. VF PAYG at present but speeds are about same as FTTC connection at moment. 3 is cheap, but last yeah when ai tried 4G despite,full signal was flaky and switching to 3G yielded slighter faster speeds and much more stable.

I have worked tethered to my phone all day, no problems, other than when I leave the house and disconnect from the phone.

It depends what your data use is but as you are an EE customer you could get an additional 5Gb data SIM for around £11 per month and then donate up to 100Gb from the unlimited SIM using the unlimited where best.

I personally would keep the low level FTTC (for general use and IoT) and hybrid with 4G. You can then load balance between them to see how the 4G performs on the router.

If your router can load balance another WAN you could always consider tethering your iPhone 12 to the router for specific tasks when at home or simply connect specific devices to either the router or the iphone depending on the intended use/task. The iPhone modem obviously is going to outperform a 4G router unless you spend a lot on a new router.

5G routers should become cheaper going forward and as always the mobile performance of the providers will constantly change as they revise/upgrade so testing periodically with test SIMs (bought or borrowed) as suggested is advised.

Whatever you go for, I wouldn’t have both your phone and broadband running off the same provider just incase the cell/mast goes down.

We risk it because our FTTC connection was awful and our 4G is great but if we could get a good FTTC speed or GFast then would probably go with that.

If you have another mast within range then it may be close enough to serve as a backup. I can pick up a weak but receivable basic 4g on B20 and 3g (B28 I think) from different masts so unless the whole network is out I can get something. In just under two years with Three there have have been four prolonged outages of several days but I have always been able to pick up and send emails and use the browser during those times.

MeanyBoy said:
Whatever you go for, I wouldn’t have both your phone and broadband running off the same provider just incase the cell/mast goes down.

We risk it because our FTTC connection was awful and our 4G is great but if we could get a good FTTC speed or GFast then would probably go with that.
Click to expand...

This is true and bear in mind the majority of bases stations are shared: (MBNL) Three/EE and (Cornerstone) o2/Voda, take a provider off each for broadband & phone if a base station loses or area loses power in worst case scenario you want to be covered.

I’m with Vodafone and EE iPhone esim backup, as I’m moving to Lycamobile unlimited on o2 I don’t need to shift the EE back up.

Apply the to the same with 4/5G router & mobile. You will rarely be caught short.

Three and Vodafone backup in all our phones here. Only top up the voda though when we need to use it.
What do you call Donald Trump as a prostitute?
Orange pay as you go 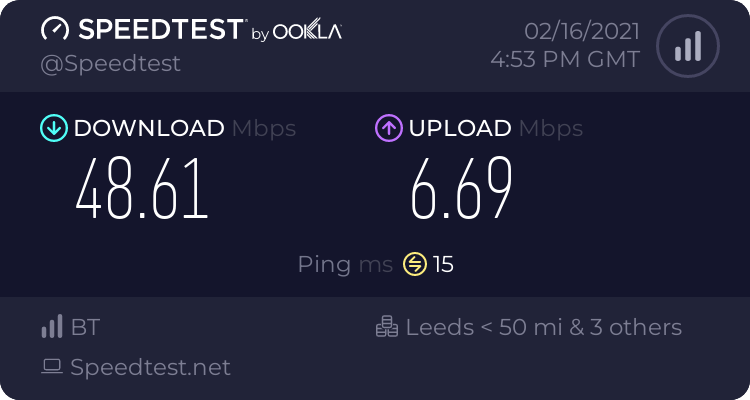 Thanks for feedback / pointers. I believe there are at least 3 EE masts in range of my house. So unless there is a regional / network wide issue, should be fine.

FTTC maybe just go to faster service…
You must log in or register to reply here.
Top