Hi, i'm in the market for a new broadband line. Currently I am on virgin media (the 362? Mb/s package) and am a bit unhappy as i seem to get fairly high latency and fairly unstable (high jitter?). (though to be fair mine is much better than many people i see in the VM forum). I recently got pushed over the edge is me and a friend were trying to play a fighting game online. But it was lagging like crazy, we both tested our connections and while his ping to the same server was sitting at a stable 7ms, mine was 16 min 50 something max and jumping around madly inbetween.

I am probably more interested (slightly) in a stable, low latency connection (though i will miss the raw speed if i have to give some up. Unfortunately providers like hyperoptic + cityfibre etc aren't available to me)

I've been trying to compare the various Openreach options but have been left a little bit confused:

BT: I have been told conflicting things. I was told that i could get FTTP with a range of 137-138 Mb but also told that i could only get G.Fast with the same speed. I'm inclined to believe the second as the person who insisted i would be getting FTTP was clearly copying stock chat messages and then doubling down. On the phone offered £39.99 a month

EE: According to EE i will get 300Mb/s down with a guaranteed minimum speed of 280Mb/s. I confirmed this with them on the phone as it doesn't quite make sense to me that i would get a faster connection from another provider from BT (regardless of whether the BT connection is FTTP or G.Fast, surely it would be the fastest Openreach provider?) £47 a month online with some kind of cashback

Zen: A similar story to EE. Confirmed multiple times that their estimate of 300MB/s down is correct. "it's what openreach says" £59.99 a month

ID: Says G fast is amber status so they can't tell me what i can get until they've put an order in to openreach (though he said he was able to check after this and the estimate is 330MB/s down and i believe 40 up)

I believe my exchange is the woolwich exchange. It's about 500M from me but according to A&A.net the line length from the exchange is approximately 1400M.

I suppose what i'm looking for is some advice on what ISP i should choose. I have read good and bad things about all of them (as i suppose i should expect) so i'm a bit stuck. I'm also very confused as to why other providers can seemingly offer faster speeds than BT, or are they just being conservative (or is it a commercial decision to cap G.Fast/ultrafast 1 to 160MB/s max)

It might also be useful to see my BQM from thinkbroadband, should i expect any improvement to this moving to G.Fast or is G.Fast a similarly noisy technology:

Staff member
ISPreview Team
When trying to understand what's available via Openreach's network (FTTC, FTTP, ADSL and G.fast), and their many supporting ISPs, then I'd start by doing an address check on Openreach's website:

Openreach is the UK’s digital network business. It’s our mission to provide the best possible network and the reliable broadband people need at work and at home.

After that you can usually get an estimate of your likely line performance (I usually tend to take the lowest 'Impacted' figure - you'll see what I mean) and availability by putting your address into BT Wholesale's broadband checker (use the address link at the bottom of this page):

NOTE: Ignore the FTTP on Demand result as that isn't native FTTP, if you only see FTTP on Demand then you can't yet get FTTP (I know.. confusing).
Mark Jackson
Editor-in-Chief - ISPreview.co.uk

Staff member
ISPreview Team
I forgot to add, the distance from exchange to home is irrelevant for FTTC, G.fast and FTTP. For FTTC and G.fast the distance that would matter - respectively - is from your local FTTC or PCP cabinet to your home. For FTTP it doesn't matter as the signal won't degrade over the normal distance of a local access network.
Mark Jackson
Editor-in-Chief - ISPreview.co.uk

I've just realised that I actually checked this before, results below: 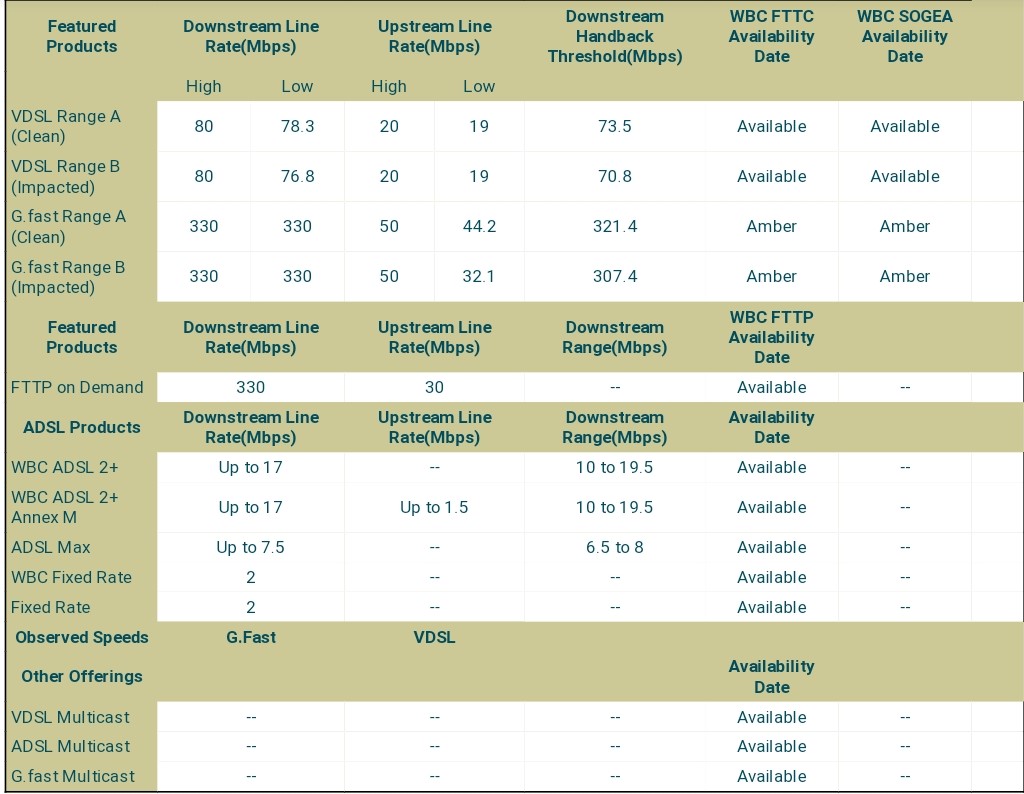 Any opinions on the isp's?

Is there likely to be a difference between the isp's besides customer service? I.e. EE charge 47 and Zen 59.99 for as far as I can see the exact same service?

Also it would seem clear to me (though of course I could be wrong / misunderstanding) that BT could provide 300mb, does this just mean they are limiting it? Is there any way to compel them not to?

Also any other obvious good isp's I should look at? ( I discounted A&A as I believe they have download limits)

Also thanks for the replies/help!

Another question I have...possibly a cheeky one. Is it possible to order two connections (e.g. EE and Zen) run them side by side for a week and then cancel the one that performs worse. Might not be possible since I would need two phone lines i believe? (currently i don't even have one)
Last edited: Sep 5, 2019

Possibly BT are only selling Ultrafast 1 on G.fast initially - once installed you can probably phone them to upgrade to Ultrafast 2.

Staff member
ISPreview Team
There can be feature differences between the services. For example, Zen gives you a Static IP address but BT doesn't. On the other hand BT offers lots of other features like cloud backup, access to a network of WiFi hotspots. I don't really want to run through the full list of things between ISPs but you get the idea.

On BT, easiest way to check is to start the availability checker on their web page and just see if it offers you to order the c.300Mbps tier or not. Forget talking to front line support staff.

As for other G.fast ISPs, you could also look at Freeola, Cerberus Networks, Unchained ISP and TalkTalk.

On the two connections question. Yes you could order a 2nd connection but you'd need a second line installed and would be committed to a full contract term. A new line install tends to attract additional cost too.
Mark Jackson
Editor-in-Chief - ISPreview.co.uk

When it comes down to it though, outside of extra features, is the connection likely to essentially be the same. e.g. download and upload speeds. most importantly, p2p connections to the same ip (e.g. if i am playing a game against a friend on either of the G.Fast connections, am i likely to have the exact same experience i.e. latency.) or will the isp i use have a big effect on this?

Also i can't find any information on whether or not EE provide a static IP address so i'd imagine they don't?

Staff member
ISPreview Team
The ISP and how much capacity it has allocated, as well as its own network setup (routing/peering arrangements etc.), can still make a difference but as these may vary from location to location then it's not easy to give a blanket answer. The less you pay the less you tend to get but they should in theory all perform to a similar level.
Mark Jackson
Editor-in-Chief - ISPreview.co.uk

Thanks a lot for all your answers.

I've got a virgin engineer coming around tomorrow as part of their last ditch attempt to keep me but assuming there's no change (i'm not holding my breath) I will likely go for zen. Though they are charging a whopping £125 for connecting me, the perks of not having a connected phone line i suppose.

Are you using the Superhub 3? It might not fix your particular issue but I found by putting the hub into modem only mode and pairing it with a decent 3rd party router the virgin connection really comes alive. If you can beg, borrow or steal a router temporarily it might be worth a shot. 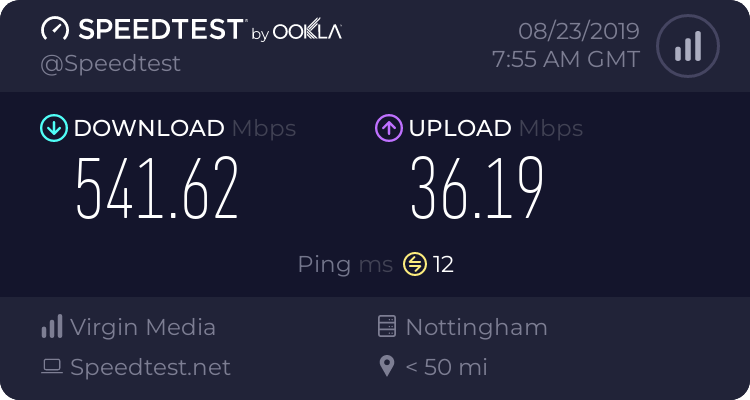 Yes i am using the Superhub 3. That might be worth a shot, amazon has a good returns policy .

Though i wouldn't even know where to begin when it comes to choosing a router.

Unfortunately I can only order ultrafast fibre plus 1 & 2 from BT as no other ISP have launched FTTP yet. So the question is, should I wait until other ISP launches FTTP with their prices or jump on the band wagon and opt into an 18 months contract with BT?
I can't find any news on when other ISPs will be introducing FTTP which means I can't compare prices.
I am up for all suggestions guys

Unfortunately I can only order ultrafast fibre plus 1 & 2 from BT as no other ISP have launched FTTP yet.
Click to expand...

Ermmmm not true. From the top of my head: Zen, IDNet, Cerberus, Fluidone, AAISP all sell Openreach flavoured FTTP. However BT Retail is likely to be the cheapest for FTTP, especially after cashback/discounts are taken into account. Sky and TalkTalk will also be selling Openreach FTTP in the future but no firm dates have been released.

Unfortunately I can only order ultrafast fibre plus 1 & 2 from BT as no other ISP have launched FTTP yet. So the question is, should I wait until other ISP launches FTTP with their prices or jump on the band wagon and opt into an 18 months contract with BT?
I can't find any news on when other ISPs will be introducing FTTP which means I can't compare prices.
I am up for all suggestions guys
Click to expand...

Quite a few ISPs have launched FTTP packages already, including ourselves as can be seen https://www.aquiss.net/unlimited-fttp-fibre-broadband/
Martin Pitt
Company Founder