Newcastle Day - Finally the Newcastle testing took place today and I put O2 up centre stage for the trip there.

Being in O2 country certainly opened my eyes to them having the upper hand, I saw Band 40 in true duo form (B40+B40 CA on 4G) I also came to notice that the average configuration on masts with 2CA was Bands 3+20 with many urban masts sporting 3CA bands 1+3+20.

These difference also showed with Vodafone where average 4G in the same locations was either single band 20 or Band's 1+20 but with a lower bandwidth of 10mhz on band 1 compared to the 15mhz seen in Central and Southern areas.

Next: Lets get into the testing
Meh

So our first test started at Washington Services (Northbound) where I came across the first instance of Band 40 (TDD2300) bonded in 2CA. 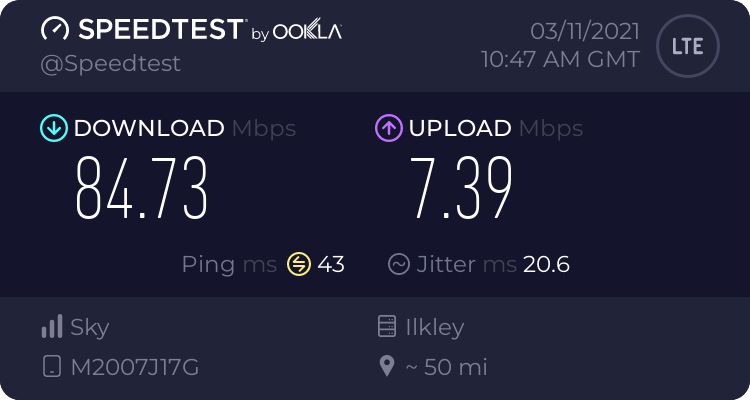 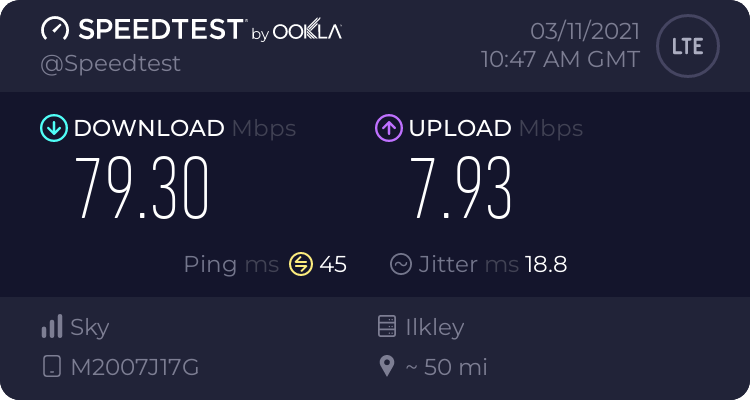 I all honestly I had hoped for a bit more from a 40Mhz serving of LTE but it's better than I see here in Brum and I also have to take into account I'm using an MVNO and may well be de-prioritized on O2's network.

My First O2 5G - First thing I noticed from NSG is there was only 1 beam coming from the cell, I thought maybe this isn't right, so I skipped it and then further into the City Centre I started picking up more cells. 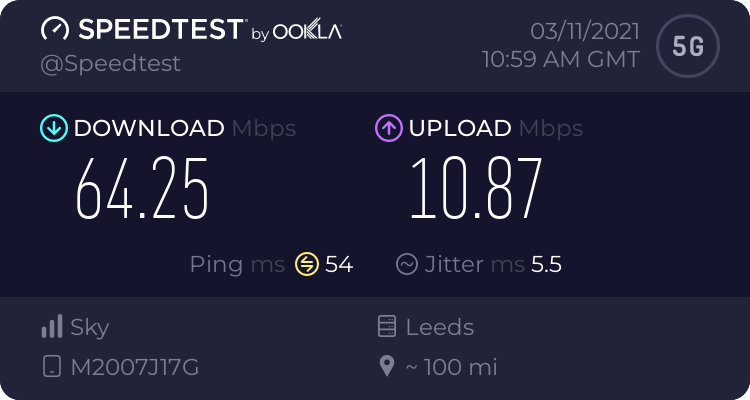 Hmmm, underwhelming, and yet again only a single beam to each of the cells being broadcast, who has such a sense of humour!

I carried on anyway, it must get better than this....
Meh

So I continued and now I'm on another mast site by the University.... 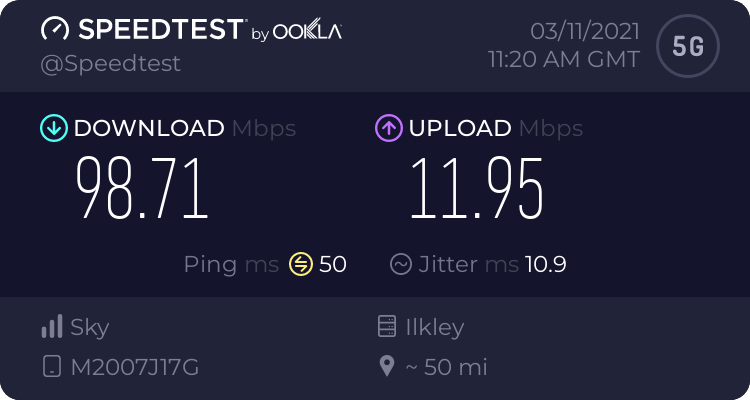 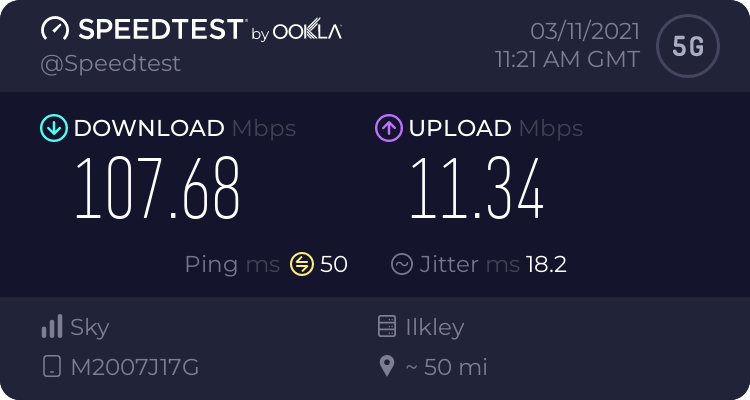 So whats the 4G like at this location, is it carry the 5G and providing the bandwidth and the 5G isn't working ??? Let's have a look.... 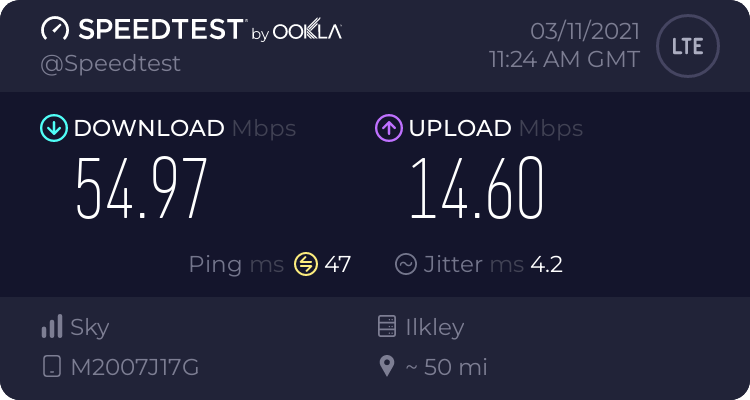 Nope the 5G seems to be working, its just been rolled out in a pathetic fashion. 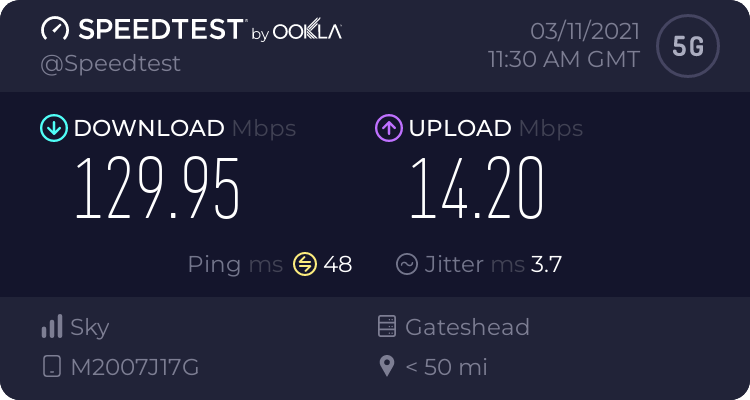 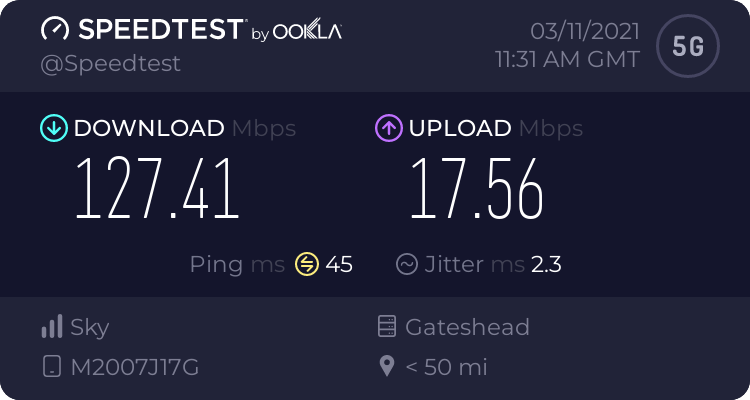 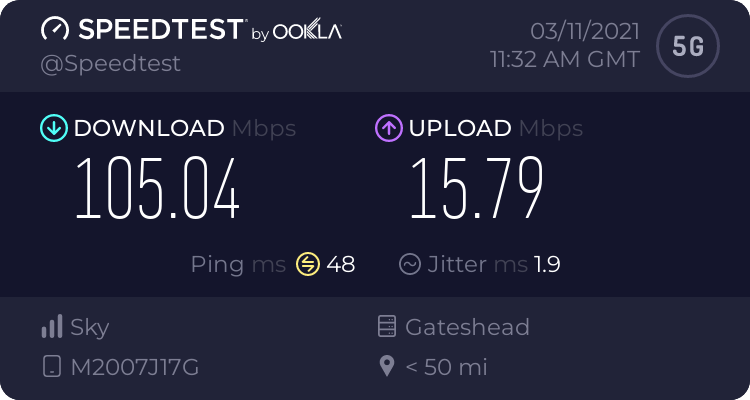 This concludes the 5G testing in Newcastle, very disappointing to say the least but a good show for the networks potential as it delivering those speeds and only broadcasting up to 25% (at best) of the 'beams' from the cell.

Why they are rolling out in this fashion I do not know however I can confirm that from what I saw of the network kit that I saw no Huawei type cells (pictured below) that I see associated with Vodafone and Three in Birmingham. 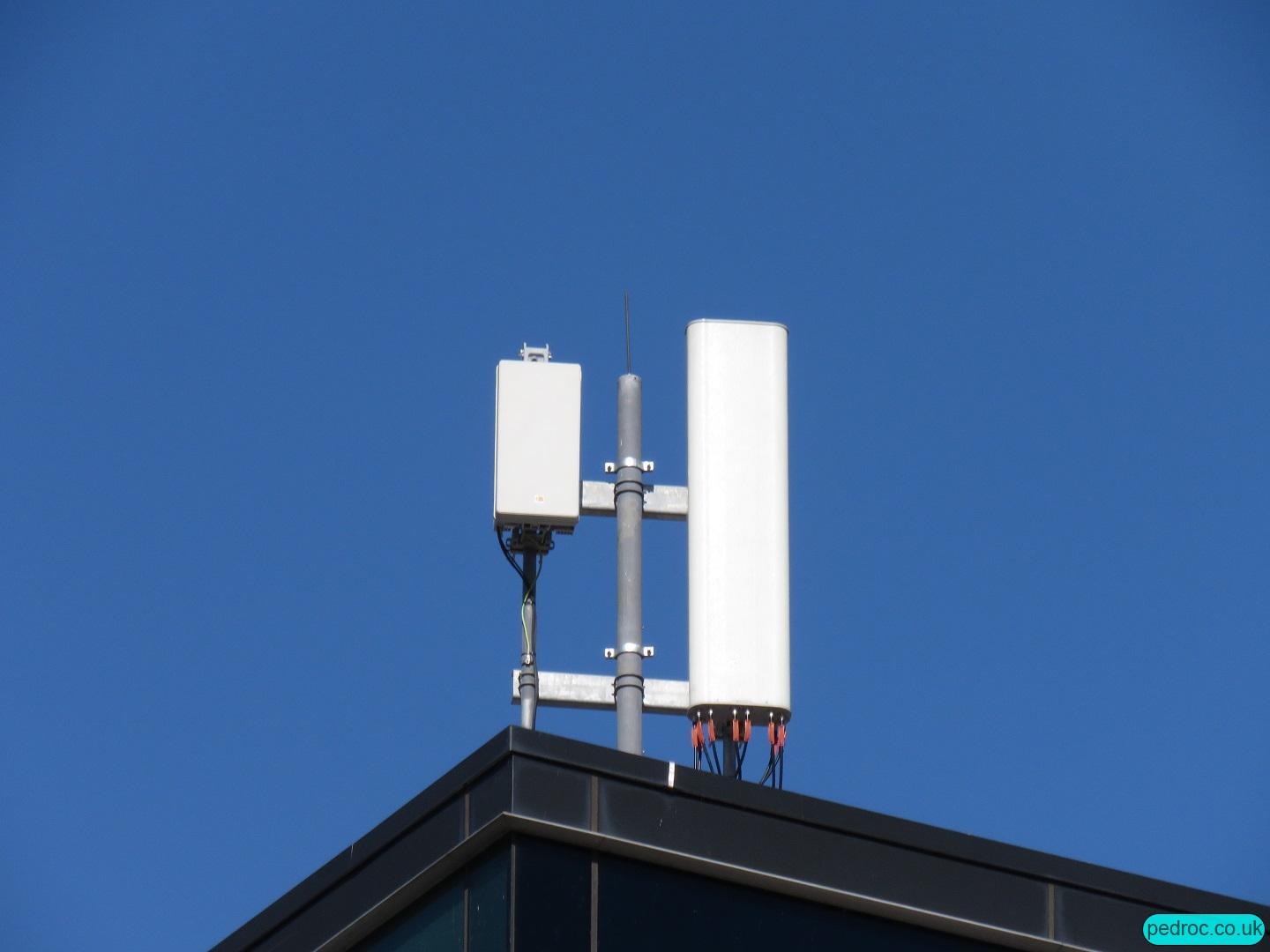 I'm hoping this weekend the weather improves and I can get more in depth look at O2 builds as they don't use Huawei kit and will also be interested to see if the trend of only using 1 beam of NR replicates.

For a few seconds I got first sightings of Band 8 (900mhz) in use for LTE, unfortunately this was after I had switched Sky Mobile sim from the 4CA capable Xiaomi to my 3CA Pixel 4a so the network decided to switch me to another 3CA set of bands before I could run a test.

That's all for O2's Network today, I did manage to get a couple glimpses of Vodafone's 5G, I'll update the Vodafone thread shortly.

A quick test on O2 today, this one quite a nice result for a 2CA configuration, the mast tested was on top of Brookpeice House, Druids Heath, Birmingham, Good Morning, So last night I was checking modulations supported by bands across O2's network,

Normally I wouldn't test services from my house as at my house the signal comes from the distant 900 meter Longbridge mast rather than the one at West Heath which is 250-400m from my window, however.... 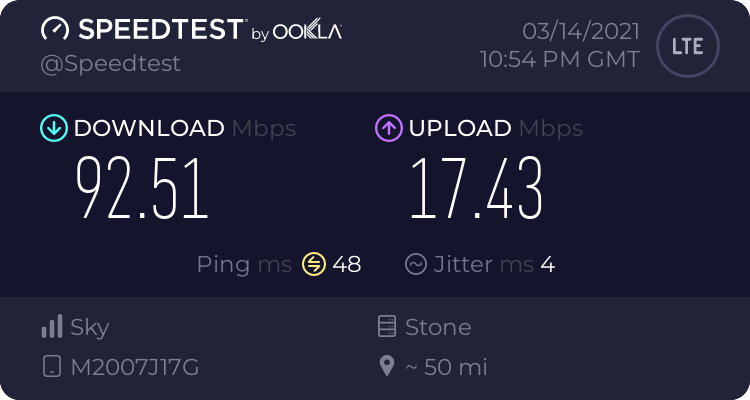 So over the years O2 has really struggled with data aspect of their service, but over the past couple of weeks of testing I can say I'm really impressed with the strides they are making to bring things in line with competition.

Sure they've still got some way to go when comparing speeds across other networks but I do consider O2's network to be one of if not the busiest in the UK with regards to what they offer and who they offer too.

My plan is to bring testing to a stop with O2's network later this week but may well resume in the future using another MVNO maybe or O2 directly as testing in this thread has been done using a Sky Mobile sim.

Later today I'm hoping to bring you some 5G results, stick around
Meh

FYI, all the modulations/rank/RBs are all dynamic based on the current device data transfer requirements (there's no point in wasting power to peg those at their maximum when there is no data being transmitted) - without data being transferred they should drop to the lowest levels.

You really need to be viewing NSG at the same time as doing a speed test to see what highest level they get to - with the free version, as far as i'm aware, the only real way of doing that is by doing split screen between NSG and your speed testing app.

@GavinAshford yeah your right really, I'll have a look later on this evening at sorting that out for future LTE testing,

I'm out testing NR-NSA today and that has very basic information available on NSG currently and I'm more focused on how much networks are allocating than what their running at currently.

Happy Monday guys and today I've been on a bit of a mission, handset in hand obviously...

I've got a lot of information to process and results to share, keep you eyes peeled as information will be coming shortly. Our 2nd stop of the day was in Highgate, Birmingham. Our 3rd test was at the Bullring Markets, Digbeth, Birmingham 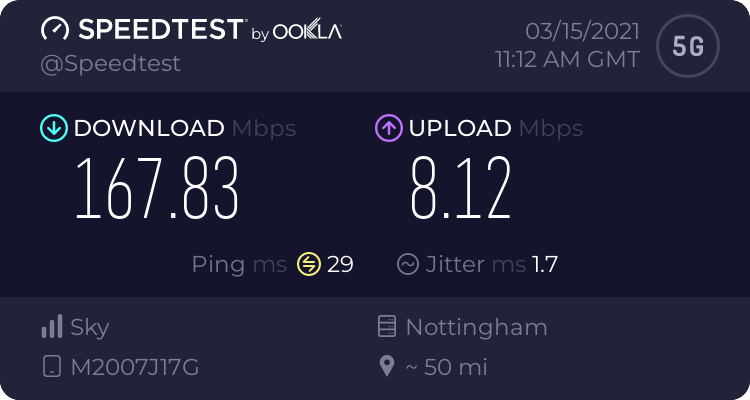 The 5th and final stop was in Edgebaston, Birmingham (near the cricket ground)

Unfortunately I didn't screenshot the cell table on this one but as above with the others there was 4 beams coming from the mast, I also tested Vodafone at this site and will be posting that over at Testing: Vodafone thread later. 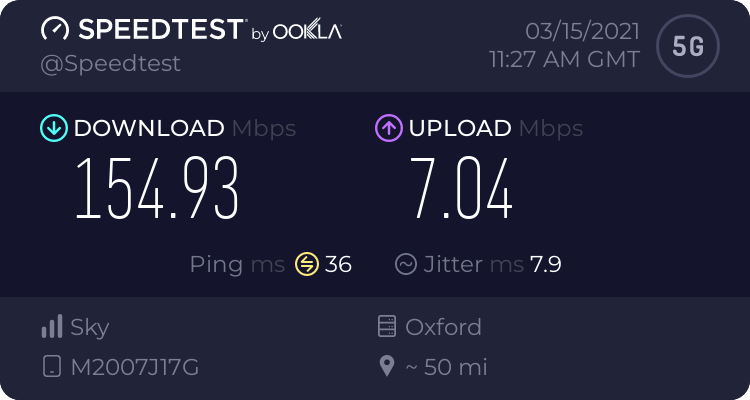 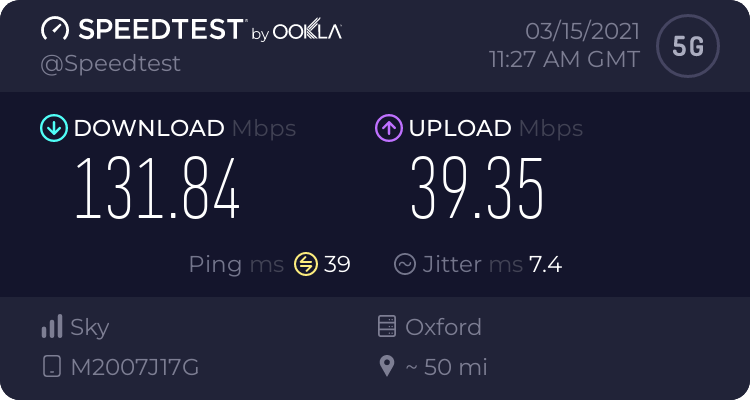 Next: A bit of information on what I found today and a review of the whole experiance with O2's 5G and also a Sky Mobile review to follow.
Meh

Closing summary: an effort but still some way to go.

So the experience with O2's network currently while satisfactory in terms of 4G/5G usability it leaves some to be desired.

Their 5G rollout seems to be very limited and reliant on the efforts of both them and Vodafone working together through the Cornerstone (CTIL) agreement, but this isn't quite all it seems either,

When in the northern regions of the UK there is a clear upper hand to O2, and it showed with their 4G network where configurations where overall much better and more spectrum was available for use,

However while Vodafone in these regions didn't have as much of their urban spectrum (Band 3/7/8) rolled out for use on masts they still managed what they had pretty well and kept up with O2's performance,

Back to O2, when testing their 5G rollout throughout the City Centre area of Newcastle Upon Tyne, there was a very small amount of effort made to make bandwidth available, I was seeing only 1 beam of NR spectrum available from each cell where I've become used to seeing 4 beams or more elsewhere.

The other thing I noticed when testing 5G in Newcastle was the availability of 5G from Vodafone wherever O2 had coverage, however this doesn't translate back in Vodafone's patch, though granted today I did see that O2 and Vodafone where sharing these masts, but elsewhere in Birmingham you will find no O2 coverage where Vodafone is available.

So what have I seen and what it my theory, well I think O2 is still struggling with backhual capacity and currently I think they are relying on a merger with Virgin Media in order to fix that problem, and while this issue exists I think it is limiting them from essentially 'activating' other mast sites with 5G services.

* correction - O2 in Vodafone hosted zones shares Vodafone's equipment and backhaul so the above statement is incorrect.

I can confirm today that where Vodafone's 5G has 4 or more beams to use, O2 does also but there is certainly a bottleneck on O2's side.

Overall: the day to day usage of O2's network hasn't been a problem and overall I think they may well have done a good job on balancing out the network it does have and also making way for the future by getting services such as VoLTE sorted in preparation for the decommissioning of 3G that is soon to be upon us.

O2 is clearly busy making changes to its 4G network such as adding cell bandwidth by introducing their Band 40 (2300mhz) to areas inside and outside their zones and although a rarity also activating Band 3 (1800mhz) and Band 8 (900mhz) which may well bring their capabilities of offer 4x4 4CA to reality.

Coming Later this week:
I'll be reviewing Sky Mobile as I take a PAC code from them and move to the next provider

Recently I wrote the following,

JitteryPinger said:
The other thing I noticed when testing 5G in Newcastle was the availability of 5G from Vodafone wherever O2 had coverage, however this doesn't translate back in Vodafone's patch, though granted today I did see that O2 and Vodafone where sharing these masts, but elsewhere in Birmingham you will find no O2 coverage where Vodafone is available.
Click to expand...

Today it dawned on me why this is, and after looking at a spot of coverage I wish to test in the coming weeks I saw what i thought I would but surprised to see more too...

In this link to Google Maps you'll see a site yet to be mapped on CellMapper, its a Vodafone and O2 5G, but unlike most sites in Birmingham from Vodafone/O2 CTIL this one is split and this brings me to the reason that dawned on me regarding O2/Vodafone sharing 5G...

O2 doesn't use Huawei as a vendor and as such means they would not get space on Vodafone Huawei 5G Radio's, however with Vodafone has agreements with multiple vendors for radio use so its not out of the ordinary to see them in places where O2 hosts 5G.

*correction - I've been valuably informed O2 does use Huawei as vendor for its services.

What surprised me though about this site, is that their is radio and panels for both Vodafone and O2's networks instead of shared panels?

Anybody with more experience on O2's rollouts is encouraged to comment.
Last edited: Apr 4, 2021
Meh

JitteryPinger said:
What surprised me though about this site, is that their is radio and panels for both Vodafone and O2's networks instead of shared panels?
Click to expand...

(*great at least compared to where the provider isnt the host.)

Because of this, sites are being 'unwound'; they're now each installing their own equipment even in their non-host areas - much more like the MBNL/Three/EE share.

Yeah I can agree this has been the case,

I suppose it served a purpose for a while.
Meh

If anybody wants to send a referral for me to use, feel free to reply or message
Meh
You must log in or register to reply here.
Top