So just thought I would start a thread to see who's still waving the O2 flag and how are people finding 4/5G performance these days.

I've just taken a £5 deal with Sky Mobile and even though its generally for use with Voice only I'm going to put it through its paces and also go hunt some of that rare 5G soon too.

Out of the gate its good to finally see O2 making its way forward in regards to bandwidth on 4G, in this area its been notoriously slow for many years and unreliable.

Now its too early to tell how reliable and stable the network is but it was nice that out of the pack I was able to run the following speed test.

I was surprised to find that the O2 is now actively rolling out Band 40, about time they started putting out some bandwidth worthy bands.

Next steps for them should be pushing Band 7 and 8, though Band 8 would be more effective given that O2 have far few masts compared with EE/3 so spreading more bandwidth further will help to balance some of the bandwdith off of Band 20.

I was thinking about taking the £5 one out as a second SIM for my phone as a business line, as my current second sim/ business line is 3 PAYG and they just put the rates up. Would be good to have a different network too, as my main sim is on 3.
What do you call a Nun in a wheelchair?
Virgin Mobile

So far all good, number transferred to it this morning without any problems, Sky online account and options are simple and to the point including adding 5G.

Out of the pack it was enabled for HD calling and VoLTE.
Meh

JitteryPinger said:
So far all good, number transferred to it this morning without any problems, Sky online account and options are simple and to the point including adding 5G.

Out of the pack it was enabled for HD calling and VoLTE.
Click to expand...

Does it have VoWiFi too? That's a requirement for me as the only network that works on the first floor is three.
What do you call a Nun in a wheelchair?
Virgin Mobile

Coming this week: Sky Mobile Sim at the ready,
See you soon
Meh

New: Been for a walk this afternoon and been looking at O2 and Vodafone's 4G services in the Cofton/Rednal areas of Birmingham.

I'm starting to think O2 has disadvantage in Birmingham since they now broadcast using Vodafone's infrastructure, I'm not sure if the CTIL/MBNL agreements where the best thing to happen to networks as it seems to put some networks at an advantage over others depending on their regional locations but I guess it levels out across the nation.

So as can be seen above this is a small monopole mast stickered by Vodafone but also features O2's network under the Cornerstone (CTIL) agreement, this seems to show as Vodafone hosts Bands 1 and 20 here where O2 are limited to just Band 20 so naturally Vodafone performed better. 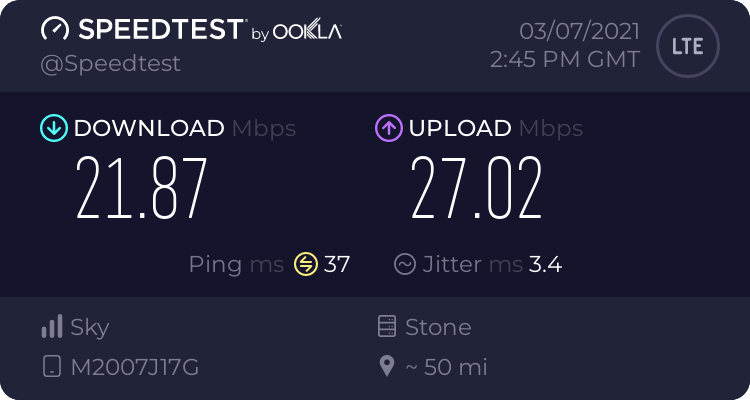 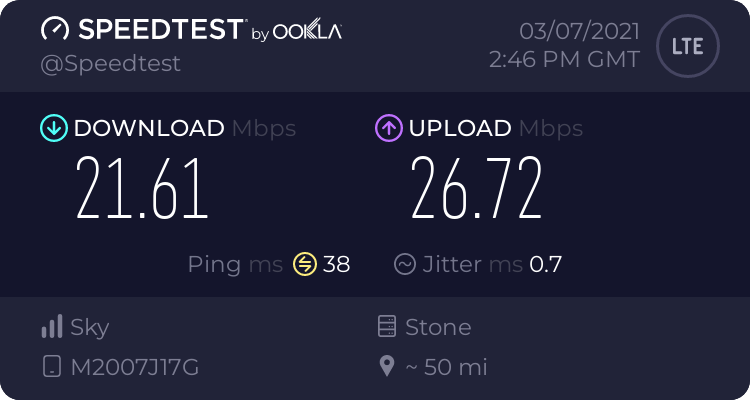 This mast as can be seen from the photos is situated next to what is an on-going redevelopment in the area (the Old MG Rover site) and currently serves quite a dense housing area.

It is sure to note however that this mast site won't be in great demand for bandwidth from home users as new builds and existing dwellings are well served by Virgin Media Cable and Openreach FTTP services and a large area is just green land too.

Next: More Monopole testing and Band 40 "does the new higher bandwidth perform as expected"

And More: Next were testing another monopole, pretty much identicle setup to the previous but now we are on the busy A38 on the border of Longbridge and Rednal and this time we have a nearly level playing field for O2 and Vodafone as this mast sports both Band 1 and 20 for both the carriers. 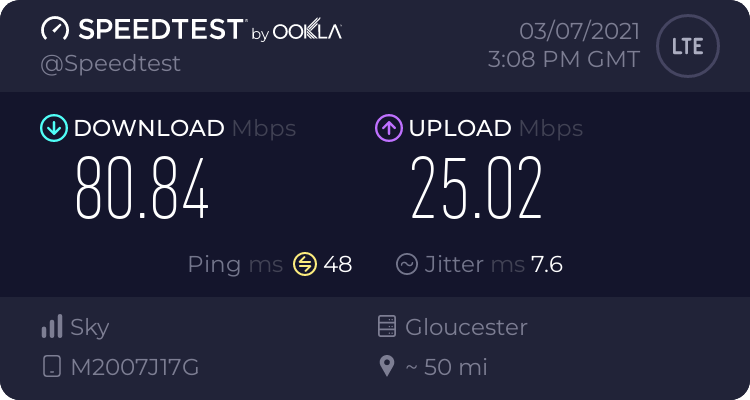 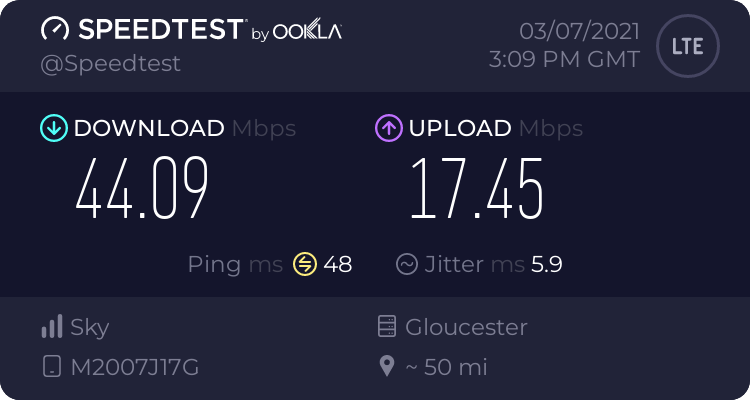 For a mast on a busy dual carriage way it performed fairly well, and O2 actually showed it can pull some weight with just the 2 carriers holding 20Mhz of bandwidth between them,

However this site does have a backup nearby to help balance the dense housing in the area and to the other side there is a larger mast site and also a large area of empty land awaiting re-development (Old MG Rover West Works site) so will be interesting to see how this mast matures.

Next: Three carriers??? and Band 40 is it a performer?

And more: So we headed back towards home and we swung by Longbridge eNB1144, previously featured in my Vodafone testing for 5G, unfortunately this isn't 5G for O2 'yet' but is featuring half of O2's Band 40 which is a TDD band sitting at 2300mhz.

The mast also features bands 1, 3 and 20 for O2, so it would be silly not to see what bonding more than 2 carriers together actually delivers,

Now by the basic math many will do there is 4 bands active so it should be possible to connect 4 at once right.... well NO.

I can tell you that 3 would connect at one so I gave it a whirl.... 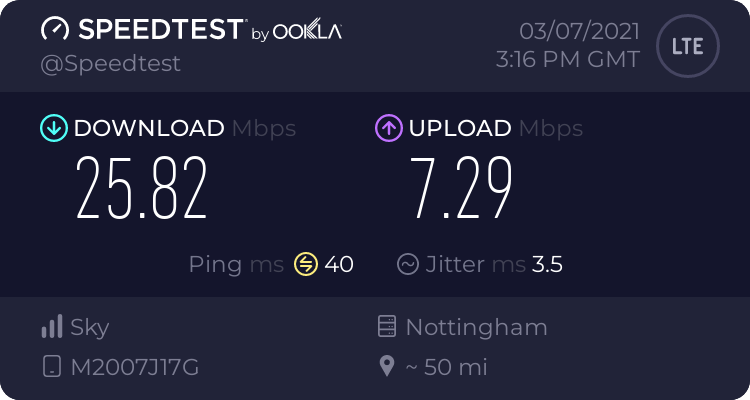 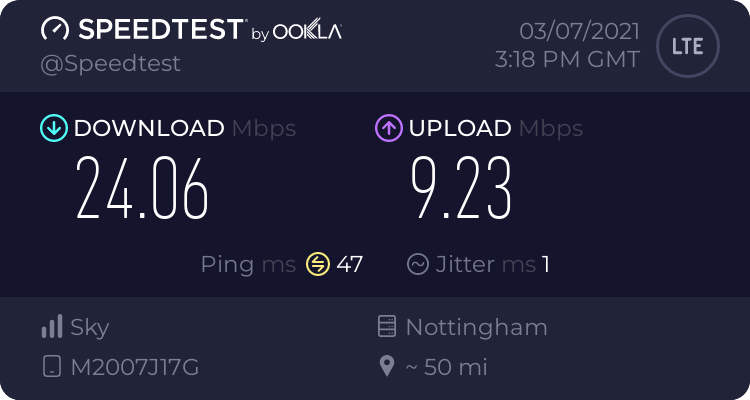 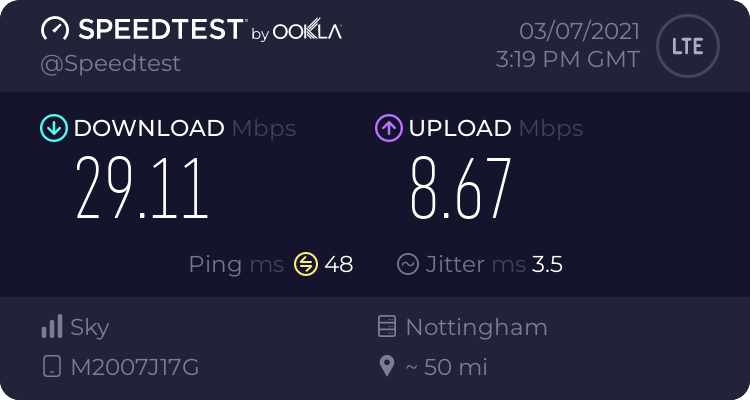 Hmmm.... not so groundbreaking but with good reason I guess...

Although 3 carriers are running together here there is the limitation of bandwidths each of these carriers actually broadcasts, when adding the bandwidths available on O2's Band's 1, 3 and 20 together it only totals 25mhz and this mast is a particularly busy one and serves a large area including mine.

In comparison Vodafone from the same site broadcasts 3CA too but its has a lot of bandwidth to give on Band 7 (20mhz) so in total it shares out 45mhz compared to O2's 25Mhz, this isn't helped by the popularity of O2's GiffGaff network in the area and also the use of many other O2 MVNO's compared to Vodafone.

So now we look at O2's new Band 40 which in total O2 have 40Mhz of bandwidth, however how its rolled out is another matter, looking over at Pedro C's website he shows us O2's Band 40 in action but in different parts of the UK where I believe O2 is the primary network on the site and Vodafone shares.

In his testing it shows O2 using two sets of Band 40 TDD spectrum together to give 40mhz paired bandwidth which would be very good for bandwidth,

However in my testing your about to see it has been rolled out as a single band of 20mhz and due to this once a compatible devices connects to it (in my case both my Xiaomi and my Pixel 4a) they are locked to using it on its its own and doesn't carrier aggregate with any other bands.

So in theory we have 20mhz of bandwidth to test away with and in theory a limitation on devices that support the Band 40... 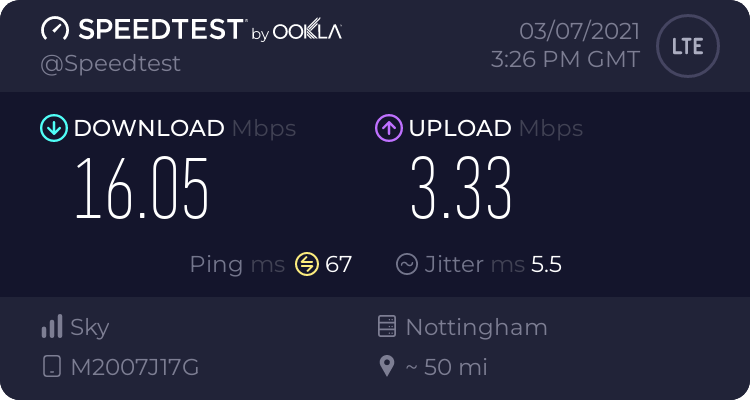 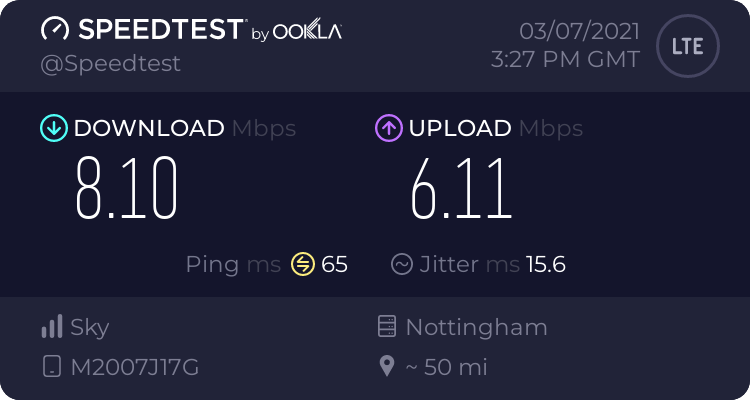 So whats going on here, well I think the issues here is that now this band has become the 'what I'm calling' "The Resting Band", my reasoning for calling it this is because when both my devices are within range of this new band they are locked in to using it while in range and even when better range from a nearer cell is available it will hang on until the end.

So that would mean that any device that's supports this new band is connecting and then sitting there regardless of being an idle phone connected to home WiFi or actually active and on the move streaming data.

As we can see above this leads the band to become primary and unbalances the network.

So we'll keep an eye on this one but my guess is some further tuning and upgrades are needed from O2 here to make this work as anticipated.

An extra note on Band 40 too, in the schematics on Pedro C's website We can see that Band 40 (L23 Baseband) is connected to panels separately to the other FDD bands 1, 3,20 (L21,L18,L08) however on these masts 'major masts' such as the one tested today in Birmingham configuration is pretty different....

Actually it would seem that both Vodafone and O2 are putting all their bands together through one panel and while that may be fine for FDD channels "I'm not sure" if FDD and TDD should be sharing like that.

I will look into this further.

Thats all for today on O2, Thanks for reading
Meh

FYI, the Mi 10T lite (assuming that's what you're still testing with) doesn't support aggregation of B40 with any other band other than more B40 (either contiguous or non-contiguous)

GavinAshford said:
FYI, the Mi 10T lite (assuming that's what you're still testing with) doesn't support aggregation of B40 with any other band other than more B40 (either contiguous or non-contiguous)
Click to expand...

Would this be the same for Pixel 4a ?

Does TDD bond with FDD or only FDD with TDD?
Meh

It depends on the device and how much development has been put into the RF side of things.

The Pixel 4a 5G can aggregate B40 with others, but not sure on the normal/non-5G 4a, no-one has submitted the capabilities to www.cacombos.com for them to list it.

Thanks @GavinAshford very helpful site to understand the bonding capabilities.

Might be explaining some things too, I think I need to get my Pixel 4a reflashed to factory rom and get it rooted and take it out, would be good to see if theres differences when CA-ing
Meh

So I've just rooted my Pixel 4a to bring it in on testing. Getting the NSG running on Pixel4a was a pain in the backside but a little DuckDuck search soon got me moving.
Meh

JitteryPinger said:
So I've just rooted my Pixel 4a to bring it in on testing.

Getting the NSG running on Pixel4a was a pain in the backside but a little DuckDuck search soon got me moving
Click to expand... 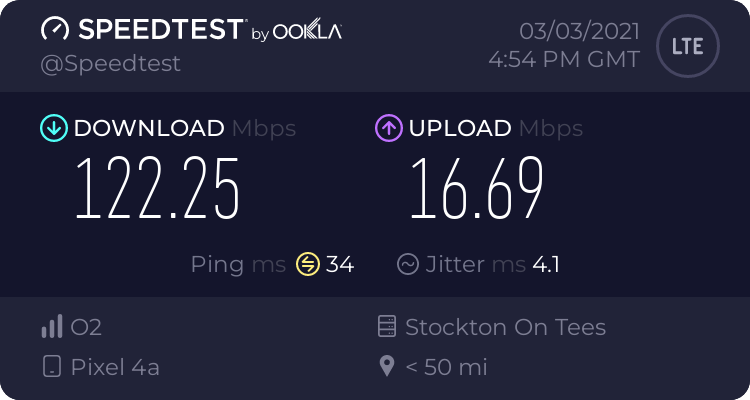 @Tom153619 Ahh nice, glad you shared this, I guess its rolled out properly, may I ask your location?
Meh

Out in Stirchley, Birmingham today for a quick test of O2's 4G, so without further delay lets get into it....

Located at Lifford Lane, beside train tracks, but tested from the High St. (A441) 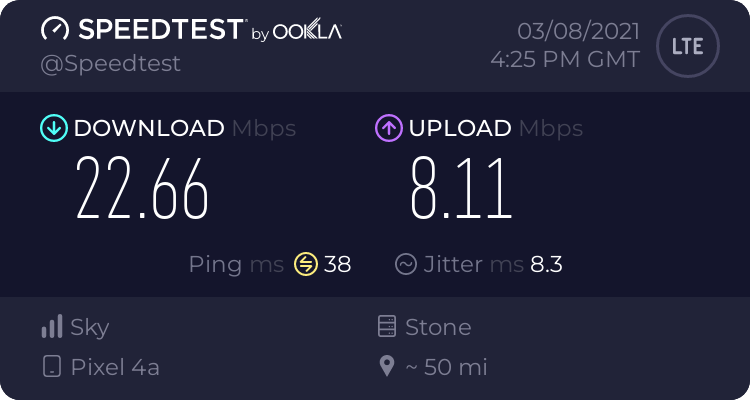 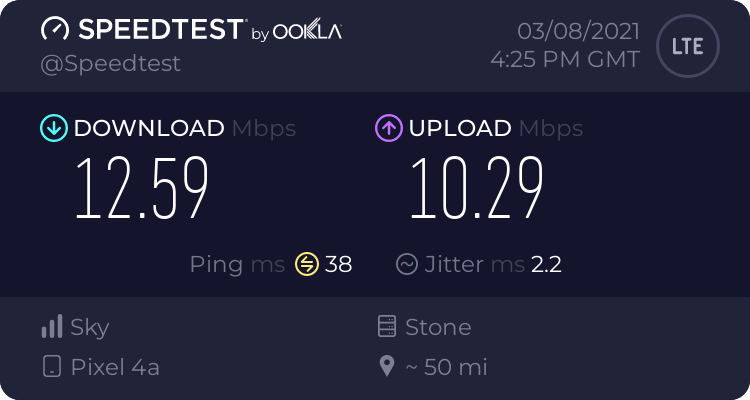 A fairly typical O2 setup around Birmingham, 2CA bands 1 and 20, I tested Vodafone's 4G also head over to Testing: Vodafone Thread for more.

Update: So this week I'll be running 5G tests on the following mast locations

JitteryPinger said:
@Tom153619 Ahh nice, glad you shared this, I guess its rolled out properly, may I ask your location?
Click to expand...

Good to know, would be more than happy for you to share more in the future.
Meh
You must log in or register to reply here.
Top